Some years back, the millennial demographic received a lot of flak in the workplace. They were labelled with negative adjectives, said to be lazy, entitled, overly reliant on technology, immature, and possessing a tendency to job hop.

Pundits frequently discussed their behaviours, speculated on their suitability for the workplace, and wondered aloud what the future of work would be like as millennials grow to handle leadership roles.

Today, those conversations are all but forgotten millenials have come into their own and as a new demographic has hit the shores of organisations – Gen Zs. The Gen Z demographic has received every negative appellation previously given to millennials and some.

Additionally, observing social media conversations and general workplace discussions shows that while the older generation thinks poorly of the work ethic of the younger generation, the younger ones return the sentiment by labelling colleagues on the farther end of the age spectrum as being narrow-minded and not open to using technology, among other things. 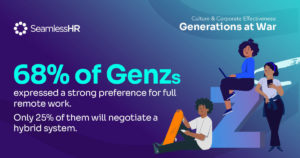 To uncover this, we led conversations with a panel of HR and business leaders and surveyed almost 200 professionals across various industries, job functions, and various demographics.

The results have certainly been interesting, showing that there are indeed differences in how the generations experience the workplace. These differences do not mean that one generation is inherently better or worse. It just means they work differently and have different expectations from the organisations they would choose to work for. These differences and expectations are things we must acknowledge, adapt to, and compensate for as individual contributors, managers, and business leaders. 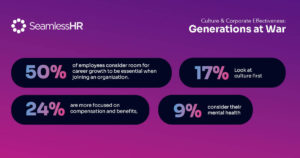 Despite this, we discovered that at the heart of things, most workers, regardless of demographic, want the same thing out of the workplace – to be allowed to grow, thrive, and make an impact in their careers.

In our report, Culture and corporate effectiveness: Generations at war, we provide employers with the context required to understand generational differences and then leverage these differences for organisational effectiveness.

This is because we believe that there should not be a ‘war’ amongst generations and that when there is understanding among the various demographics, productivity skyrockets, creativity becomes more commonplace, problems are better tackled, and organisations are better off.

“Technology is the only path to regional competitiveness for Kenyan enterprises, as it provides them with a great opportunity to accelerate their

“Technology is the only path to regional competitiveness for Kenyan enterprises, as it provides them with a great opportunity to accelerate their

We serve cookies on this site to analyse traffic, remember your preferences, and optimise your experience.